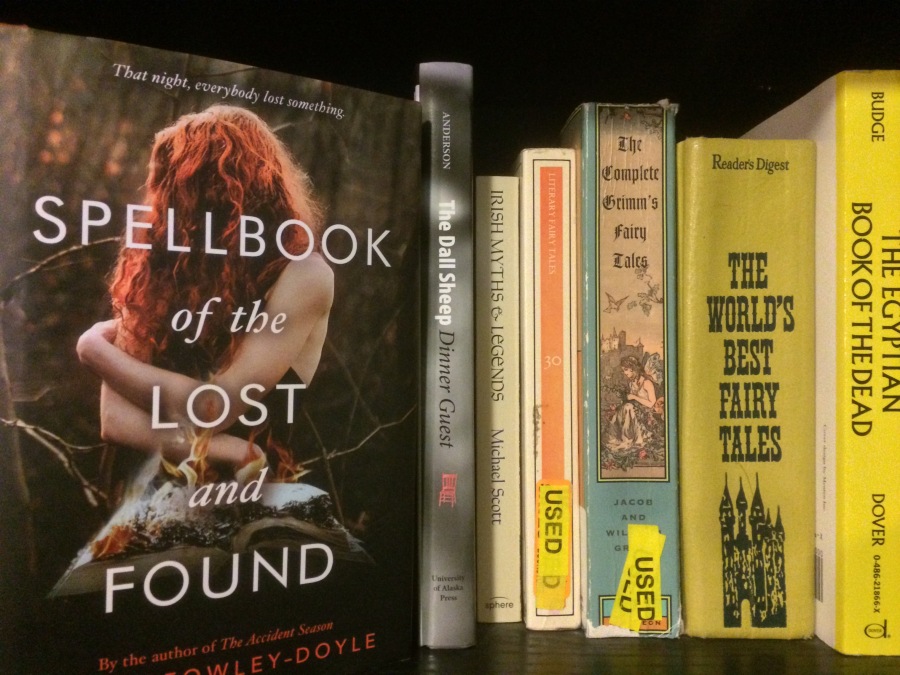 Magic is a fascinating concept.  An invisible, unknowable force that will somehow allow normal people to accomplish extraordinary things.  The wizards in J.K. Rowling’s Harry Potter series can conjure creatures, fly, teleport, and more.  Going back to the middle ages we can find stories of alchemists attempting to create homunculi through arcane spells.  Even farther back, ancient Greece had the oracles, young women who could commune directly with the gods.  There are still those today who believe in magic, but the magic they believe in is very different from what came before.  Instead of wizened crones serving the village, we have the internet.  Instead of elderly wizards studying in towers, we have teenagers holed up in their bedrooms.

Spellbook of the Lost and Found, Moïra Fowley-Doyle’s second novel, is not an American book, which is an important distinction.  Fowley-Doyle herself is half-Irish, half-French, but lives in Dublin.  The novel takes place in a small, quiet town in the Irish countryside.  In American literature, this would fall under the Young Adult category.  There would be chosen one figure, a grand villain with an intricate plot, evil and incompetent adults defeated by scrappy teens.  What Fowley-Doyle presents us is something very different.  There is no clear villain, no convoluted plot or plan.  The main characters are still teenagers, but they are not chosen ones.  They are not fighting the classic battle of good versus evil.  They have led rough lives, for very different reasons, and are just trying to do the best they can.

In the interest of full disclosure, I have not read Fowley-Doyle’s first novel, The Accident Season, so I cannot compare the writing in her second novel to that of her debut.  However, the prose can only be described as beautiful.  At times it is dreamlike and ethereal, as Fowley-Doyle takes us through the uses of the titular spellbook and the magical aftermath.  At others, the writing is more grounded and dramatic, granting a realistic look at the normal.  The story is told in the first-person, switching back and forth between three different characters: Laurel, Hazel, and Olive.  Each girl has a very distinctive style and personality, especially Laurel, who spends much of the novel apart from the others.  In fact, it is the pursuit of Laurel and the mystery of her identity which forms a key element to the plot.  Olive and Hazel’s stories connect as they orbit each other’s lives and, occasionally, it can be difficult to remember which character we area reading.  However, those moments pass quickly and occur infrequently.

Our three point-of-view characters may be Laurel, Hazel, and Olive, but they are far from the only important characters in the novel.  Olive’s closest friend is Rose, and it is their friendship which provides the momentum for Olive to become interested in the spellbook.  Olive and Rose both come from, not rich, but certainly well-off families in the town.  Their lives can best be described as normal before the events of the novel.  The two friends attend high school, experiment with their sexuality, and complain about their families.  Hazel, on the other hand, lives in an abandoned development with her twin brother Rowan, and their best friend, Ivy.  Both are in love with Ivy, but Hazel’s desire to maintain their friendship prevents her from moving forward.  Laurel is something else entirely, and the reveal of her identity is one of the novel’s major twists, which I will not spoil.

Spellbook of the Lost and Found begins with all the characters losing something important to them.  Treasures, friendships, virginities, hearts.  And, as the story progresses, they keep losing.  Items go missing, more friendships are fractured, trust is broken.  Fowley-Doyle employs an interesting narrative device by beginning every chapter with a list of what that character has lost.  Or, once the spell is cast, what that character has found.  The things they lose are not just physical, however.  As the losses pile up, characters lie.  They steal.  They become so afraid of losing the people around them that they will attempt to hold onto what they have found by any means necessary.  Yet, the lies are never malicious.  These characters are teenagers at a time in their lives when most of us were terrified of the future.  Our worlds are so small during those years and the loss of something small can seem like the end of the world.  The items these characters lose are both small and large, significant and forgettable.  But, at a time when insecurity reigns, lying to keep a friend may seem like the best option.

The spellbook itself is another found item.  It appears just when characters feel like they have lost something tremendous.  Laurel and her friends use it to find the diaries they presume stolen, the diaries into which they have poured their souls.  Hazel uses it in an attempt to save her mother, but from herself and from death.  Olive uses it to try and protect Rose, who was raped while at a party just before the start of the novel.  The spellbook offers a way to bring all that they have lost and prevent them from losing anything else in their lives.  So, they cast the spell.  And things turn up, but not necessarily what they called.  What Olive remembers, and the rest seemingly do not, is that the spellbook comes with a disclaimer;

Be careful what you bargain with; / Every lost thing requires a sacrifice— / A new loss for every called thing found.

What will you let go of? / What can you not afford to lose? / Consider carefully before you cast the calling; / It may not be for you to choose.

Be careful what you wish for; / Not all lost things should be found.

The ends with the spellbook lost once again, and no answers given as to the nature of it’s magic because, ultimately, that’s not what the book is about.  Spellbook of the Lost and Found may feature magic, but the focus is always on the characters and their non-magical lives.  Fowley-Doyle does something a YA novelist would never do; she lets us spend time with her characters.  We go to school with Olive and Rose, we share a drink with Hazel and Rowan, we exchange secrets with Laurel.  The novel is not about loss, as much as the characters believe that at first.  They learn to let go of some of the losses, the things they can never get back, and refuse to dwell in the past.  Not all losses are sad, and sometimes letting go is exactly what you need to find something new.

Spellbook of the Lost and Found may be found in store, online, or wherever books are sold

Next on the list: The Shape of Water, by Guillermo Del Toro and Daniel Kraus