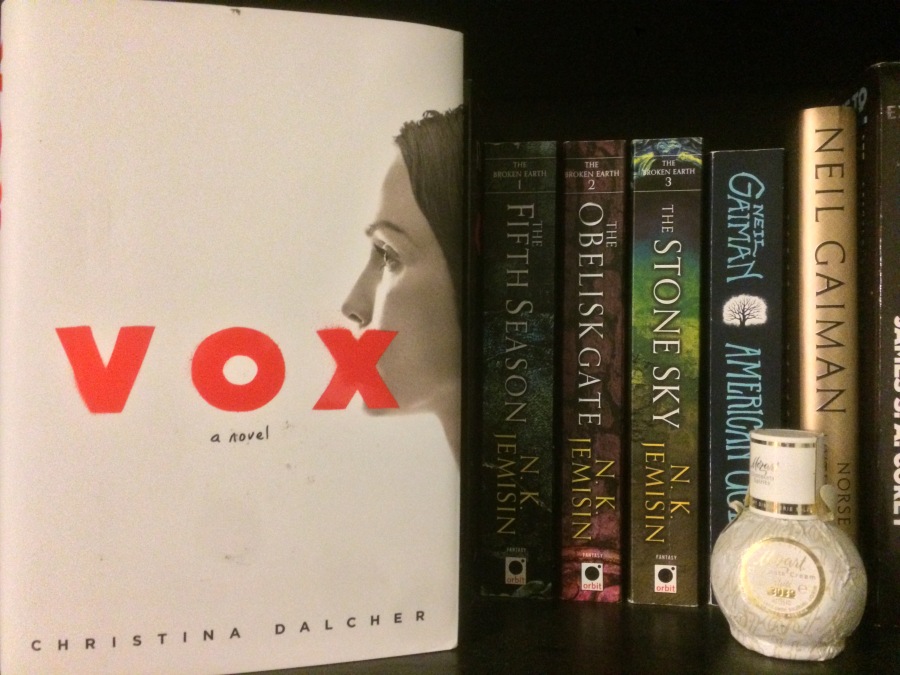 It is no secret that the United States of America is in a state of political and social turmoil, and has been in turmoil for the last 685 days.  Elections have yielded unpredictable results; laws are being passed, rolled back, declared unconstitutional, or misinterpreted.  Misunderstanding and misplaced anger are high and aimed at undeserving groups.  Modern-day Nazis and white supremacists gathered en masse and walked through major cities.  For a while, our world seemed to become worse.  But, in the midst of the chaos, voices could be heard.  Women stood up and declared, “Me Too.”  Men and women alike huddled in front of computer screens, enraptured by The Handmaid’s Tale.  Men and women gained the courage to stand up, let their voices be heard, and tell their stories.  Sometimes it was about them, and sometimes it was about their characters.

Vox is clearly inspired by The Handmaid’s Tale, and would likely have not seen the wide release it has without the television show coming first.  That being said, Vox is a less extreme version of the show.  Where The Handmaid’s Tale is violent, sometimes overly so, Vox is more about power dynamics and slow change.  Having never actually watched the show—I have lost my tolerance for over-the-top violence; I blame Game of Thrones—I do know that the country is overthrown by a violent coup.  In Vox, the origin of the dystopia is much more mundane, and also much more believable because of it.  There is no violent uprising, no armed groups marching down streets.  There is a citizenship too preoccupied with their daily lives to realize the power of one vote.  Liberals and free-thinkers lose their re-elections, slowly replaced by the Christian right.  One by one, laws are written and replaced, and with all the major power structures controlled by rich, white, religious men, there is nothing to stop their passing.  Women cannot vote, cannot hold jobs, being anything other than cisgender and heterosexual is illegal, and, most perversely, women can only speak 100 words a day.  Each woman, regardless of age, is outfitted with a counter.  Words over 100 result in progressively more powerful electric shocks.  This is the world of Vox.

The author, Christina Dalcher, is a linguist.  That description is grossly selling her short.  Dalcher received a doctorate in theoretical linguistics from Georgetown University.  Her specialty is the sound differences in dialects of English and Italian.  Who better to write a novel about the theft of language than someone who understands language better than anyone else?  We all have a superficial understanding of how important language is to our daily lives, but most people have not studied it or how language actually affects us.  Imagine only being able to speak 100 words in a day?  Most of us burn through that before even leaving for work in the morning.  This paragraph alone is nearly double the daily limit.  However, Dalcher’s sheer intelligence does not always translate into fiction writing.  Despite the plot-enforced limit on language, we never see how people find ways around that limit.  There is a brief flashback to seeing women using sign language, and readers learn that there are plot reasons preventing creativity.  Still, the lack of creative language on the part of the characters does feel like a missed opportunity.

Vox follows the point-of-view of Dr. Jean McClellan, who also goes by Gianna.  As the sole POV character, we are in Dr. McClellan’s head throughout the novel.  Despite her voice being locked away, we are submerged in her inner voice.  Like Dalcher, Jean is a linguist, forced to give up her career by law by the current administration in the novel.  The character is also Italian-America and speaks Italian fluently.  There is a subplot concerning her parents back in Italy, which serves dual-purpose and allows Dalcher to show how the outside world is reacting to American’s new turn.  This is a slight spoiler, but the rest of the world is not impressed with our mistake.  Jean remembers her life before the new political generation, remembers seeing the elections and hearing about how discontent straight white men were.  But Jean, like roughly half of Americans today, did not vote in the elections.  She did not march when unjust laws were passed, or racists and misogynists were elected to public office.  In her flashbacks, we see a young professional concerned with her family and her career.  In the present, we see a woman who regrets her inaction and partially blames herself for the decline of society.  She did not believe in the problem until it was too late.

The plot of the novel, once the basic setup is established, concerns a medical condition known as aphasia.  To quote the National Aphasia Association’s definition of the condition: “Aphasia is an impairment of language, affecting the production or comprehension of speech and the ability to read or write.”  Before the country demanded women no longer work, Jean was working with a team on a cure for aphasia, specially the kind caused by damage to Wernicke’s speech area in the brain.  Aside from the electric-shock word counter, this is the only other piece of science-fiction technology in the novel.  Jean is allowed to come back to work on the project after being told that the President’s brother suffers from aphasia.  She says “no” first, of course, but quickly changes her mind after experiencing a new level of word restriction and envisioning a future where her six-year old daughter grows up and nothing has been fixed.  In exchange for her daughter’s returned speech, Jean goes to work.

For the most part, Vox’s plot is engaging.  It is full of interesting twists and explorations of the new society.  Where Jean previously thought all Americans were inactive and accepting of the new order, she quickly learns that is far from the case.  However, one area where the novel does falter is the ending.  I will not spoil it here, since the basic idea is very interesting.  However, the ending itself feels very rushed.  Things happen, and they happen quickly, not leaving us with enough to time to contemplate what we have read or the potential fallout from the characters’ actions.  Some things which could have been shown are instead summarized.  On top of that, we do not even get to witness the finale of the novel.  Jean, after all her work and fighting to protect her family and her integrity, does not enact their plan.  She hands it off to her husband.  In the plot, it makes sense.  However, the resolution is unsatisfying and seems to go against Jean’s agency.  While her husband saves the world, she stays home, watching the kids and her thinking about her new, unborn child.

Despite the novel’s flaws, Vox is a novel everyone should read.  Society is in more danger now than it has been in quite some time.  Dangerous men rule the nation and sex offenders are recommended for high office.  Some people are punished for their crimes, but too many seem untouchable, despite everything they say and do.  Vox merely shows one possible outcome to our current trend.  Not as extreme as The Handmaid’s Tale, but, hopefully, still extreme.  However, there is a major difference between the fiction and the reality.  In Vox, Americans did nothing but watch as dangerous men took over the country.  In reality, Americans fight every day for equality, liberty, and basic human dignity.

Midterms are coming up here in the United States.  I will never tell anyone who or what to vote for.  All that matters is that your voice be heard.  Go be loud.

Vox may be found in store, online, or wherever books are sold

Next on the List: The Book of Hidden Things, by Francesco Dimitri

3 thoughts on “They Tried to Take Our Voice: A Review of Vox, by Christina Dalcher”