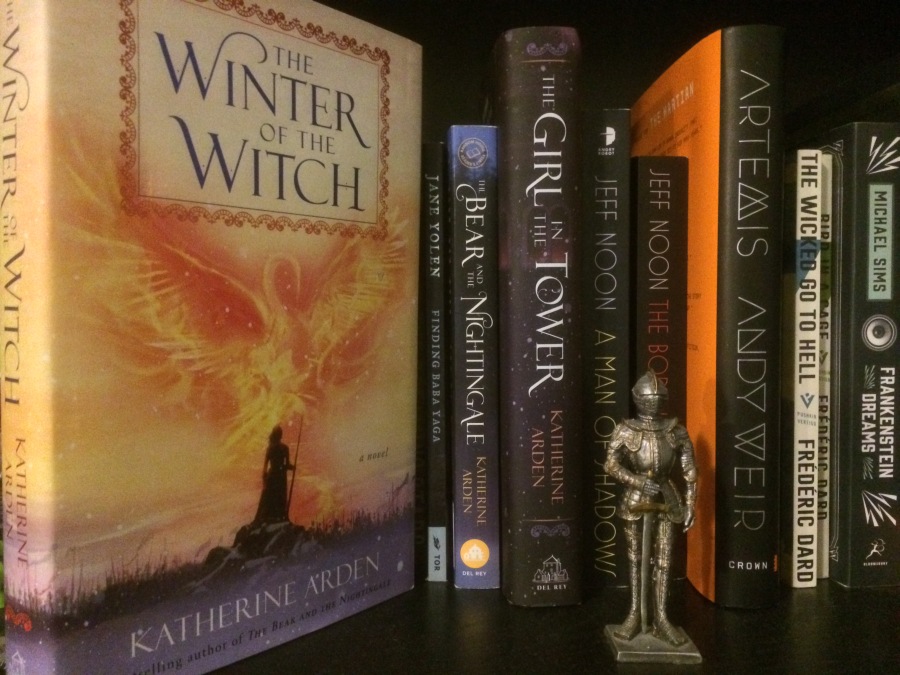 Vasilia Petrovna has been branded a witch.  Since she was a child, she could see and speak with the chyerti, spirits from Eastern European, whom the people around Vasya seems to have forgotten.  Vasilia is forced to leave home after defending her village from Medved, the bear, the spirit of chaos and life, in Katherine Arden’s first novel, The Bear and the Nightingale.  In her second novel, The Girl in the Tower, Vasilia travels to Moscow in the guise of a boy and a hero to the Russian people after assisting the Grand Prince destroy a group of bandits.  Vasilia helped save the city, but not before her arrogance and lack of caution exposed her disguise to disguise.  While the city is safe, the danger Vasilia is greater than ever at the start of The Winter of the Witch.

The opening of this novel is not pleasant.  Father Konstantin, the Christian priest and Vasya’s recurring enemy, has used the chaos from the finale of the previous book to whip Moscow into a mob, a mob he controls.  Using this mob, he is finally able to target Vasya with the intent of punishing her for the perceived harm she has caused him.  Konstantin portrays himself as a figure of authority, but he is truly a weak person under the surface.  When Vasya attempts to flee the city, she is captured and her horse, Solovey killed.  This sets the tone for the opening of the story, as Solovey has been the one constant in Vasya’s life since the first novel in this series.  In his fear, Vasya’s lover Morozko, the Winter King, frees his brother, the Bear, in a desperate deal to save Vasya’s life.  Vasya is able to escape on her own, unknowingly freeing the Bear from his deal and letting him loose on Moscow.  Vasya is forced to flee once more, this time in a realm born from fairy tales which no mortal can cross.

Vasya has been through a lot as a character by the time The Winter of the Witch enters its main plot.  She has suffered intense trauma, living through multiple skirmishes and violent events.  She watched her father die, and had to fight a zombie created from the corpse of her caretaker.  She accidentally killed her sister’s unborn child to save her from death during childbirth.  She has been beaten, attacked, humiliated, betrayed, and nearly raped several times.  She watched her best friend, Solovey, decapitated in an instant without the opportunity to mourn.  The first act of The Winter of the Witch is all about Vasya hardening herself.  She cuts the hair she is so proud of and refused to allow herself to cry.  She finally begins learning magic to protect herself, but struggles to balance her trauma and desire to gain even more power with the need to be careful and not lose herself to that power.

Arden’s trilogy has always had certain themes present, focusing on the old versus the new and the way in which women were treated during this particular time in Russian history, around the thirteenth or fourteenth centuries.  The Winter of the Witch keeps those, while also discussing the nature of order, chaos, and the balance between those two, embodies by Morozko and Medved.  Near the start of the novel, Vasya is asked which side she will join, or if she plans to create her own side.  It takes Vasya most of the story to realize what this question meant, and spends a good portion of the plot trying to rescue Morozko and fight Medved.  While Medved is almost always portrayed as a force of destruction, he is also shown to be occasionally necessary.  The two must balance each other out.  Too much order or too much chaos and that balance suffers.  This is a theme seen in many stories, but rarely are the two sides so perfectly embodied in characters.

The Winter of the Witch takes place in a very unique period of Eastern European history.  Russia at this time was not even close to unified, and was not a sovereign state.  Rather, this is the height of the Golden Horse, one of the successor’s to Genghis Khan’s Mongol Empire.  During this time, Christianity continued it spread all Europe and began cementing its hold in the more remote regions of Europe, such as Russia.  The Golden Horse also started to splinter during this time due to constant in-fighting, allowing its border territories, such as Moscow, to attempt to break free.  The battle to free Moscow from Mongol rule is central to Vasya’s story, and is a threat which has hung over the main character’s heads since the second novel.  Vasya both believes in defending Russia and using the battle to demonstrate a united Russian people, mortal and spirit.  Despite everything she has suffered at the hands of her fellow Russians, Vasya never turns on them.  Even with the violence she experiences and the stakes of the war, The Winter of the Witch ends up maintaining a level of optimism that Vasya will succeed.

The Winter of the Witch is not without its fair share of criticism, however.  This is very much the final book in a trilogy, and feels like the final book in the trilogy.  The climax is a large battle, blending elements of fantasy with traditional medieval warfare.  The enemies are never given humanity and instead portrayed simply as something monstrous the heroes must overcome to save their home.  The stakes and the powers escalate when compared to previous novels in the trilogy as the main character finally comes into her own and gains the powers they have been seeking throughout the story.  The Winter of the Witch sets up the main villain to be Medved, returning from the first novel, but ultimately suffers at the end, lacking a final, compelling villain to lead the enemy during the final battle.  Vasya and her army are ultimately fighting against an idea, which works during the smaller moments, but is difficult to portray during the required final battle.

Overall, The Winter of the Witch is a satisfying conclusion to the story of Vasilia Petrovna.  Vasya is a fascinating character, and we want her to succeed and be happy while reading these novels.  It hurts when she suffers, and we feel her grief when friends and family die.  In spite of everything that happens to her—the pain, the suffering, the loss—The Winter of the Witch manages to give Vasya the happy ending she deserves, bittersweet as it is.  Vasya reaches the end of her story triumphant, having finally become free.

The Winter of the Witch can be found in store, online, or wherever books are sold

Next on the List: The Reign of the Kingfisher, by T.J. Martinson